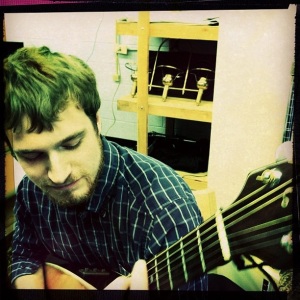 Photo taken by Zachary B.

This is a post derived from an email thanking NYC Resistor for their help in getting me started on this path. I have at this point successfully completed the project, and I’ve gotten a lot of satisfaction from the build. I may be having a more complete write-up later, but for starters, I have a few pics and things to share.

I used a variety of suppliers for different things, but I did stop by Leeds Radio for the tubes and sockets. The transformers I ordered online through Angela Instruments (www.angela.com), and a lot of other parts came from www.tubesandmore.com, and a few parts from Mojo Musical Supply (www.mojotone.com), namely the chassis and a few values of power resistors and a silver mica cap or two. It’s great to have found all these suppliers, because they will be the same ones to supply future builds like this and my aspirations to build my own guitar in the next 6 months or so.

The build isn’t my own design (this is my walking before running stage with tube amps and audio electronics), but I got it from a book, The Guitar Amp Handbook, by Dave Hunter. It has the design in the back for the “Two Stroke” amplifier he designed, meant to be an experimental amp that can have swappable output tube stages to generate different power output as well as different tones.

Here’s a re-hashing, in a few pics, of the build I was sourcing parts for a while back near Easter time.

Chassis from the back view. From left to right, the holes are for: preamp tube, output speaker jack, output stages 1 and 2, rectifier tube. An additional hole had to be machined for the second output stage between the other two octal tube slots. The machinist I work with did me a favor. It’s an exact match!

Chassis with components test fit for size. Input 2 will be used for a “boost/voice” switch (not pictured).

Turret board with some components dry mounted (not soldered). Note: in the future, i should use eyelet board. Much easier to deal with. And also, that orange capacitor is in the wrong place. I moved it to the proper place before all this was soldered together.

More components dry mounted. Note: this board is a fender 5F1 style board and the design pictured in the schematic is a 5F2. Some connection points are missing, but those components will be wired ‘point to point’ off the board. This will be visible in later pics.

Partially assembled view. Power transformer is mounted, as well as completed circuit board, wired up panel switches and knobs, input jack, output jack, and tube sockets. This picture shows only the 9 pin preamp socket is complete, the other tube sockets are incomplete. I opted for only one output jack for the moment and if I want to split it I’ll use a Y cable from the single output.

Complete assembly. Tubes are inserted, and I finally got the proper switch sizes (sorta) for “boost/voice” and “impedance”. Those random wires go to the output transformer which will eventually be mounted to the bottom of a header cabinet.

Output transformer is seen in complete assembly. The other two wires (orange and green) could be used in place of white and yellow to create different impedance combinations for other speaker cabs in the future if needed. The current wiring should give an 8 ohm impedance to match to the 2 6V6 tubes (impedance switch flipped one way) or one 6V6 tube (switch other way).

At first it powered on but didn’t pass signal to the speakers, but I corrected a few minor soldering mistakes and it worked like a charm! I had the output jack wired backwards for one, and pin 2 on the 12AX7 pre-amp (the output of the pre-amp, no less) was grounded by mistake.

Here is the completed working assembly on top of a speaker cab with twin 12″ Radishack paper cone speakers. It’s a beast, that’s for sure. A huge thank you goes out to Don Bragg for the donation of the speaker Can his father made for him many years ago. It really strengthened the project immensely. My last step is to build the header cabinet.

I did build the cabinet a while later, and made a few glamour shots of it. It’s still unfinished wood surface, but I’ll get around to finishing the outside one of these days.

Let me know what you think. Any feedback is appreciated.

Never worry about robots trying to take over the world. Worry about the people driving them ;)
View all posts by robotorbust →
This entry was posted in Audio, Music, Projects. Bookmark the permalink.