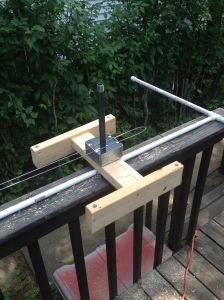 Today has been a day of Bottle Rocket fun. There are a lot of bottle rocket launcher designs out there, from the simple, to the complex, and the cheap to the costly. I remember in middle school my science teacher and Science Olympiad coach gave me the designs for a small launcher I could play with on my own. I since modified it to be able to take higher pressures and launch higher and straighter. This design is a hybrid between two designs that he had used: one that he build himself with a car tire valve and electrical box, and the one design that was given me as a PVC Tee and pipe nipple launch tube.

The resulting hybrid (pictured, left) uses the two concepts in tandem. The  electrical box is hooked to a base constructed of 2 x 4’s and uses a pin to hold down the flange of the bottle onto the launch pad until the pin is pulled, allowing pressure to be built up before release. The wooden base gets staked into the ground to hold the rocket relative to the PVC assembly.

The PVC piping is used to be a pressure vessel and one end of the PVC Tee has a bike tire valve cemented into the end cap. This acts as a one way valve and delivers pressure to the rocket. The PVC tubing is all 1/2 inch diameter, the size that fits insude a 2L soda bottle.

The longer launch tube (12″ nipple) allows for more stability of the rocket as it goes off the pad, and also puts the entrance of the tube above the rocket’s water line, and less water will be leaked this way. (key word, LESS; this doesn’t *prevent* water leaking).

The Mk II is designed to not need stakes into the ground. We needed to develop a laun ch platform that could be deployed in a parking lot. So a piece of scrap plywood screws down a Mk 1 base to act as the ‘ground’, and the launcher is ready to go.

In addition to the longer nipple, this year’s bottle rocket launchers include a removable screw-on cap for the one end, so that water can successfully be drained from the pad before storage. This was very difficult on the Mk I launchers.

of course, a lot of this piping may be unnecessary, but it’s a simple tried-and-true design that I implemented by upgrading the primitive ‘pump till it flies off’ version (just the PVC alone with no hold down mechanism). There are more sophisticated designs out there too, that are very elegant. The best by far has to be the NERDS Launcher (Nebraska Educators Really Doing Science, http://www.NERDSinc.com). Their launchers are machined aluminum with O rings for extra super duper sealing power, and they have fully integrated pneumatic triggering of the launcher. Magnificent tech–for $300. Perhaps a future investment. I was able to build the Mk II for around $20 in parts and ordinary household

Never worry about robots trying to take over the world. Worry about the people driving them ;)
View all posts by robotorbust →
This entry was posted in Educational, Just for Fun, Projects, Rockets. Bookmark the permalink.